The Fòrum Gastronòmic Girona opens its doors with a large number of visitors and top-level presentations and workshops. 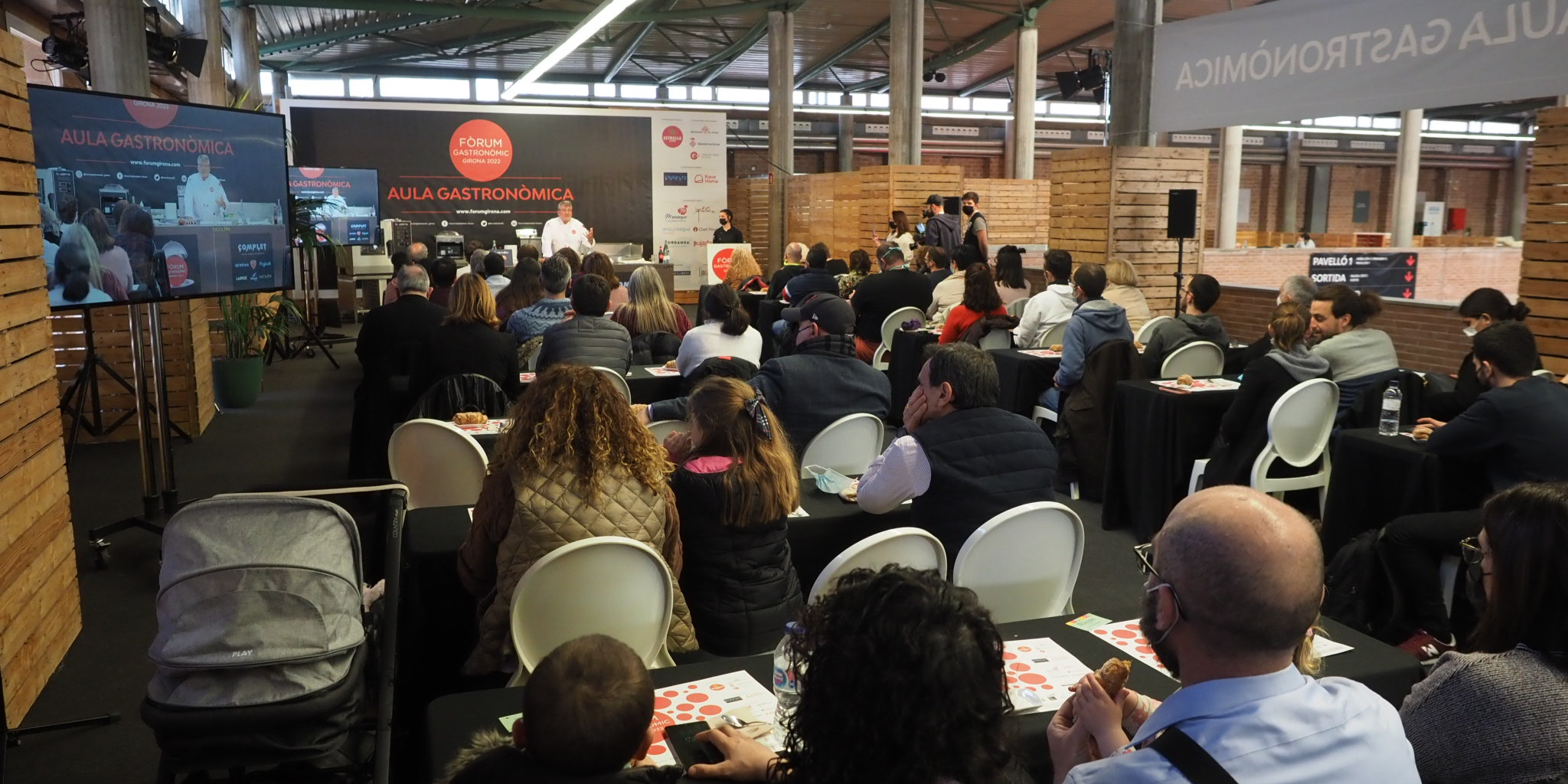 The Fòrum Gastronòmic Girona was inaugurated today, opening its doors for three days of frenetic activity with presentations, demonstrations, debates and competitions. A large number of visitors filled the aisles of the exhibition area, which also hosted 120 exhibitors from all sectors related to gastronomy and catering. Activity was intense in the conference, debate and gastronomic classroom areas.

In the Auditorium, the chef Marc Ribas attracted the attention of the public with his demonstration of new traditional cuisine, followed by Ada Parellada, who captivated the audience with her strategies for recovering the value of food use in the restaurant industry. Jordi Cruz and the painter Quim Hereu then added a touch of imagination, creativity and art to the field of gastronomy. The Auditorium also hosted the presentation of Clásico Penedès, the new Catalan Designation of Origin, and a talk by Nandu Jubany on sweet creams.

Debates between professionals were another of the highlights of the opening day, in a commitment by the Fòrum Gastronòmic to focus on the structural needs of the sector and discuss them with the protagonists themselves. Meritxell Falgueras, Raül Balam, Marijo Jordan and Judith Càlix debated the glamour of gastronomy. The debate room also hosted a conversation on the figure of food critics and content creators, and later the presentation of the project Welcome to the farmer all year round, through the experiences of various producers, and a tasting of cheesecakes paired with distillates.

The great creators of xuixos compete for the prize

The competition for the best xuixo in the world also took centre stage on the opening day of the Forum. The Juhé patisserie in l'Escala, headed by Agustí Gardella, beat some thirty patisseries from Catalonia that took part in the third edition of this competition. The xuixos presented were meticulously evaluated by the jury made up of the pastry chefs Julià Castelló and Natalya Prokopenko, Fernando Toda and the gastronomic journalists Josep Sucarrats and Yaiza Saiz.

Another area of the event that has opened with a great deal of activity is the Aula Gastronómica, where today there have been cooking workshops for oncology patients, on blue fish, vermouths and bíters or cooking with xuixos. There was also an intense day in the area of presentations of start-ups linked to gastronomy and the hotel and catering industry, and especially in the Girona Excelente space, where there were open presentations on cured meats, Empordà cuisine and cocktails.

With the doors of the Fòrum Gastronòmic now open and with many visitors taking part in these activities, the show was officially inaugurated at midday. The event was attended by the Vice-President of the Government of Catalonia, Jordi Puigneró, the Catalan Minister for Climate Action, Food and the Rural Agenda, Teresa Jordà, the President of Girona Provincial Council, Miquel Noguer, the Mayor of Girona, Marta Madrenas, and the Director of the Girona Chamber of Commerce, Eduard Torrent.

Activities at the Fòrum Gastronòmic will resume tomorrow at 10 am. You can find the full programme at www.forumgirona.com